This valley known as the secret land Tsum Kyimo Lung of the Tsum people, was prophesied by the Acharya of Uddiyana Padmasambhava, Rigdzin Gödem, and many other great masters. From ancient times on, Pawa Namo, who was known to be a descendent of the wise minister and servant of the emperor of black-haired Tibetan people Tönmi Sambhota, came here seeking a secret land prophesied by the gods. He built bridges where there were none, named places with no names, and founded residences, establishing the two fine traditions. To this day, the people continue to maintain their parents’ and ancestors’ traditions of the ten virtues of the true dharma and the sixteen pure practices of the worldly dharma.

Many great beings including the mahāguru Padmasambhava and the Lord of Yoga Mila Laughing Vajra have set foot in this valley, blessing it. In particular, after he had spent many years benefitting beings, the great Tertön from Lhodrak Guru Chöwang, a learned and accomplished master, established this monastery at this place that glows with the richness of blessings. This place, known locally as Ngawa Ngak, has a long history. Chöwang and his descendants, the Ladrang of Ngak—recipients many letters, decrees, and proclamations sent from the royal palaces of Nepal and Tibet in olden times, including a tamapātra from the Gorkha kings of Nepal—have continuously nurtured the true dharma among the people of Tsum both directly and indirectly.

With this history as the basis, we are now having a grand celebration of the completion of this Chökyi Düdey Monastery, a center for the Buddhist teachings that will be an unsurpassable sign of the excellent virtue in the near term as in the ultimate for human beings in general and the people of Tsum in particular.

This has come about due to great great compassion of my root guru, Khenchen Thrangu Rinpoche, the great guide whose kindness I could never repay, and the incredible power of the bodhichitta of Pangtön Lama Pema Lhatsen Rinpoche, my father and the Dungse of the Ngak Ladrang lineage of the Great Tertön and King of Dharma Guru Chöwang. The current holder of the Ladrang Dungse Lama Pasang Puntsok Rinpoche has taken on the primary responsibility, working on this project with Dungse Dawa Tashi. Material and financial support has come from various individuals with faith, and the people of the area, young and old alike, have all pitched in together to help.

May the great accumulations of positivity of completing this be a cause for all sentient beings, our mothers, achieving perfect enlightenment. In all countries, may all the scourges of disease, famine, conflict, natural disaster, and all the corruptions of a degenerate time be quelled, so that all beings may live rich in dharma and the glory of comfort and joy. When connected by this good motivation, if we put effort with actions of body, speech, and mind, may it be just so due to the power of the truth of the three jewels and unfailing interdependence.

Written by the one who holds the title of this familial lineage, the Shakya Bhikshu Pema Tsewang, on the eighth day of the eighth month of the Tibetan Earth Pig year, 6 October 2019. Sarva mangalam. 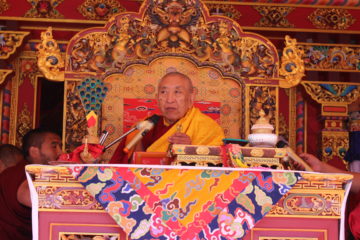 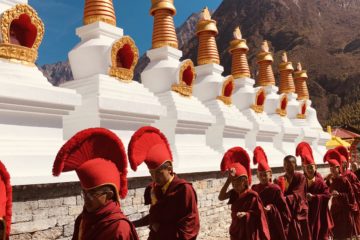